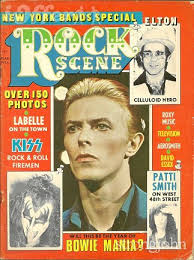 Rock Scene was published quarterly from Bethany, Connecticut between 1973 and 1982.

NEW YORK — AL Green is the man who has put the word "sweet" back into soul music. He's the singer who in the space ...

Iggy Pop, The Stooges: Open Up and Bleed: Stooges in New York

IGGY IS hurt, he's down there on the floor, he's picking up these pieces of broken glass and tossing them down again, pissed at the ...

IT'S ALL in the moves. Willie, Joe and Pops of the Chambers Brothers are grouped around a microphone in the duskily-lit interior of Venture Sound, ...

IT'S A WEEKDAY night in New Jersey and there's another school day to face tomorrow. Yet the Joint in the Woods is packed to the ...

Queen... we won't hold back

AFTER SIX concerts in four days, Freddie Mercury is immobile in the sack. Each time he's been awakened, he's successfully managed to roll over (Beethoven) ...

ALL THE girls love blond Billy Idol (he pouts like Brando), and Generation X seem to have the right attitude. "No Session Musicians" it says ...

MORE UNIVAC rock from the Berlin brainiacs. These geeks (you want a definition of 'geek', just look at this cover) nicknamed themselves "the man machine" ...

PHIL MANZANERA is one of those talented guitarists who speak much more eloquently with their hands than with their mouths. His "message" lyrics bemoaning the ...

ABOUT HALFWAY through this fine album, I began to feel disappointed. Blondie is so widely recommended I'd hoped to at last muster some real enthusiasm ...

"It's like if you're an artist and they say, 'I'm sorry but you can't have your paintings displayed in public anymore.' The radio's really awful, ...

EVER THE one to keep my ear to the ground in search of the new and hot happening thing, I was more than fucking happy ...

I GUESS THAT this is what you would call a true story of friendship and ambition. The scenario is a group of kids in their ...

RUSHING INTO the Capitol record offices in New York, I was more than a little nervous about doing this interview. That is making a major ...

THERE HAVE been many things written about the Swedish wunderkind guitarist since he burst upon the heavy rock scene in the early '80s. ...

THIS COLUMN is begun in an extremely serious and somber mood, as the wings of the great black naughty nightbird death have come beating and ...

Dan Reed Network and The Theory Of The World

MY FIRST exposure to the Dan Reed Network was a memorable one. Although I had heard the debut record and thought it a good shot ...

STRAIGHT-FORWARD pop rock – the stuff of summer fun, driving with the top down, and hot sticky summer nights when you're in a strange town ...