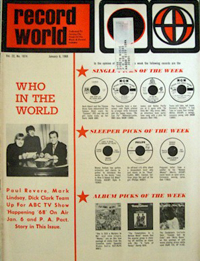 Founded in 1946, Record World magazine was one of the three main music industry trade publications in the United States, along with Billboard and Cash Box magazines. It ceased publication in April 1982.

Jack Nitzsche: Music Above All

HOLLYWOOD – Jack Nitzsche, arranger and songwriter extraordinaire, got his first big break in 1958 and says, "There hasn't been any biggest break since then, ...