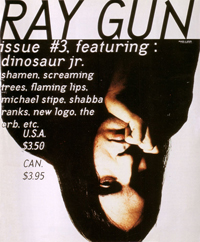 Launched in Santa Monica, California in 1992, Ray Gun was an alternative rock-and-roll magazine, published 10 times a year. It ceased publication in 2000.

THE FIRST TIME I met Morrissey was nine years ago, when the thin, seemingly mild-mannered singer was slightly in need of a shave; when he ...

HER HOUSE IS set back from the street, on a wide avenue in Maida Vale. A pair of imposing, wrought iron security gates shield it ...

THE BETA BAND are an awkward bunch of ne'er-do-wells. It takes roughly thirty seconds after sitting down with the acclaimed London-based four-piece to discover this.  ...

FROM ITS ACUTELY localised inception, the influence of Bristol's Wild Bunch has spread far and wide. The sound system that spawned Massive Attack, Tricky and ...

OVER THE PAST TEN YEARS, I've endured a recurring theme in my late night dreams: the Rolling Stones, finally realizing the vapid decline of their ...

XTC: English Settlement: The Rise and Fall and Rise of XTC

The Grifters, Those Bastard Souls: Bastards No More: Life After Grifting

The Grifters’ David Shouse seeks redemption with THOSE BASTARDS SOULS. ...

Guided By Voices: Do The Collapse (TVT)

GUIDED BY VOICES’ Bob Pollard has reinvented his rock’n’roll vision, trading his home recording ethos for a slick pop sound. This aesthetic change reflects other ...

Neil Hagerty and Jennifer Herrema, the "Glimmer Twins" of Royal Trux, have packed a lot of living into the past decade – including heroin abuse ...