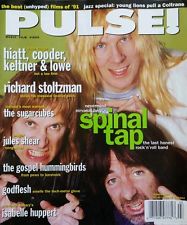 First published in 1983, Pulse! was a tabloid magazine published by Tower Records in the USA which contained record reviews, interviews and advertising. Initially, it was given away free in their stores but in 1992, it changed to a conventionally distributed magazine. It ceased publication in 2003.

Ornette Coleman: This Maverick of Modern Jazz Doesn't Like to Be Pigeonholed

MOST OF THE other horn-wielding giants who shook the foundations of jazz a generation ago — Coltrane, Dolphy, Ayler — are gone now. But Ornette ...

A Story About Film, Fashion and Fresh New Sounds. ...

One of pop's most eccentrically self-important extremists, Julian Cope drops drugs, gets centered and creates his first brilliant album ...

On Lou Reed's touching elegy to two recently departed friends, Magic and Loss, he grapples with the age-old question: What is the meaning of death? ...

The Cure: Robert Smith: Dr. Robert Explains It All

In a rare solo interview, Cure leader Robert Smith dissects his cult, defines his own private punk and pursues his Wish. ...

Midnight at the oasis...Actually, it’s 2 a.m. at the Hit Factory, but the mood is still calm as a desert breeze. ...

Independence Day, 1991. Lincoln Park, Chicago. One by one, the Replacements — what's left of 'em, anyway — hand their instruments off to their roadies, ...

Kate Bush is very... unlikely· A teen prodigy, she rocketed to the pinnacle of the British charts with her 1987 debut, ‘Wuthering Heights’, a very... ...

ARETHA – a name so singularly musical that it rolls off the tongue like an incantation. Almost four decades after 1967’s ‘I Never Loved ...

IT'S THE MIDDLE of a lazy Los Angeles spring day, and the view from the roof of the Griffith Observatory reveals a sprawling basin shrouded ...

IT'S DECONSTRUCTION time again. Right now, there's a sophomore somewhere hunkered down on the floor of his dorm room, a cigarette in one hand and ...

Blur: Blur Knocks The Pulp Out Of Oasis, Right?

Report and Interview by Andria Lisle, Pulse!, May 1998

"PURE FUNK and earth" is what Luther Dickinson calls the lilting blues played by 90-year-old Othar Turner, last surviving master of the cane fife. And ...