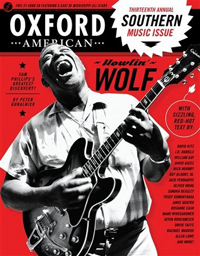 Oxford American is an American quarterly literary magazine "dedicated to featuring the very best in Southern writing while documenting the complexity and vitality of the American South" It is now published by the University of Central Arkansas in Conway, Arkansas.

Little Walter, Dave Myers, Junior Wells: Dave Myers: They Used To Call Me The Thumper Because I Played So Hard

Allen Toussaint, Lee Dorsey: Lee Dorsey: Why Isn't This Man in the Rock and Roll Hall of Fame?

NO SINGER in the Big Easy had a more easygoing manner than Lee Dorsey. The rhythms behind him could be wickedly syncopated (they usually were), ...

THE STAPLE Singers didn't get started until ten years after the family patriarch, Roebuck "Pops" Staples, moved the clan from Winona, Mississippi, to Chicago in ...

THERE IS A PICTURE, taken early in May 1997, at Ellen’s Soul Food Restaurant in Memphis. It’s a Sunday afternoon, and we’ve just arrived from ...

WHEN ANN Peebles and Gene "Bowlegs" Miller first crossed paths at the Rosewood Club in South Memphis, neither would have called it destiny. As Miller ...

BLUES HARMONICA fans beware: Jerry "Boogie" McCain's harp-blowing is anything but conventional, and this collection, featuring material cut a decade into his career, during the ...

Jim Ford: White Soul from the Black Hills: Whatever Happened to Jim Ford?

TWENTY YEARS AGO I drove around the American South in pursuit of something I called "country soul." By that term I meant the late '60s/early ...

DURING A VISIT to New Orleans twelve years ago, Shannon McNally, a talented young vocalist from New York with a critically acclaimed pop debut to ...

NOTE: This is the original, previously unpublished version of Bill's article.  ...

A SLIGHT, YOUNG brunette stood alone in a navy Richard Tyler slip on the Opry House stage, backed by a pianist and a string quartet, ...