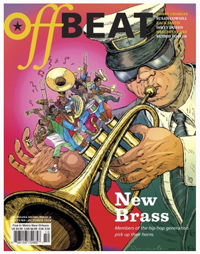 OffBeat is a monthly music magazine in New Orleans, Louisiana first published in 1988. It mainly focuses on the music scene of New Orleans and Louisiana, the region's culture and its cuisine.

Jon Savage: Cool and the Crazy

Psychic TV have flirted with religious and anti – religious imagery through their growth time, they set up the Temple Of Psychick Youth and, more ...

Johnny Thunders: An American In Sweden

SO, WHY did I wait around half a day for a three-minute interview with Johnny Thunders? ...

John Sinclair: First things first: everybody wants to know who did your hair for the record cover of Television? ...

ONE OF the happiest side effects of the Louis Armstrong centennial celebration is the reconfiguration of this master musician's catalog. For many years, much of ...

NOT ALL THE gospel music at Jazz Fest takes place in the Gospel Tent, a fact that will be brought home with great spirit by ...

THE SEPTEMBER release of James Blood Ulmer’s No Escape From the Blues: The Electric Lady Sessions is a milestone event in this centennial Year of ...

The Meters Are Right On Time

Retrospective and Interview by John Swenson, Offbeat, 1 May 2005

"A lot of people don't know who the Meters are, but they sure know the songs." – Leo Nocentelli ...

IN 1960, ALLEN Toussaint and Irma Thomas showed up to audition at WYLD studio in New Orleans for Joe Banashak and Larry McKinley of Minit ...

THIS IS Aretha Franklin at her absolute peak, fronting a supercharged band led by King Curtis and featuring the Memphis Horns with special guests Ray ...

Charles Bradley is off Script at Jazz Fest

Report and Interview by Geoffrey Himes, Offbeat, 1 May 2014

ON THE FIRST Saturday of Jazz Fest 2013, Charles Bradley strode out on the Blues Tent stage as if he weren't 65 years old but ...