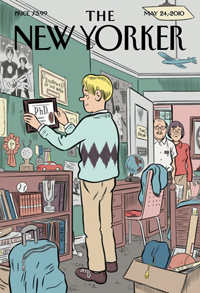 The New Yorker is an American magazine of reportage, commentary, criticism, essays, fiction, satire, cartoons, and poetry. Started as a weekly in 1925, the magazine is now published 47 times annually, with five of these issues covering two-week spans. It is also available online.

Retrospective and Interview by Michael Azerrad, The New Yorker, 12 August 2002

JOHN FLANSBURGH and John Linnell–partners in the musical duo They Might Be Giants–were on their way out of a trendy little restaurant in Williamsburg, Brooklyn, ...