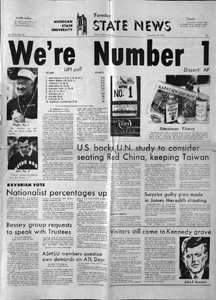 THIS SUNDAY night promises to be an occasion that campus music lovers will never forget, as the brilliant Alice Coltrane opens up the series of ...

PATTI SMITH, poet/vocalist of the Patti Smith Band, will be making her East Lansing debut at the Silver Dollar Saloon Wednesday night. ...

Bruce Springsteen: Darkness On the Edge Of Town (Columbia JC 35318)

Keith Moon, The Who: Keith Moon and rock 'n' roll: "Hope I die before I get old"

WHO DRUMMER Keith Moon died Sept. 7 from an overdose of a sedative prescribed to combat alcoholism. He was 31. The Who, presently finishing their ...

The Ramones: An Interview With Joey Ramone — A Teenage Lobotomy Speaks His Mind

THE RAMONES have become something of an American rock 'n roll institution. The band formed in 1974, and became part of an underground East Coast ...