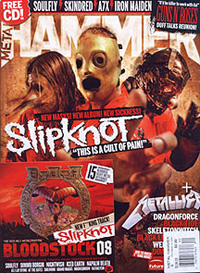 "Rock'n'Roll is the perfect art which conceals art, that satisfying spontaneity which can be achieved only by taking intense thought" – Kathleen Cleaver (paraphrased) ...

OUT OF THE SEARING underground of Los Angeles, an unlikely place for speed/death metal in the wake of such like bands as Guns N' Roses, ...

AMONG THE GREAT British guitar giants, there are, men with powerful egos, possessed of erratic genius. Then there is Rory Gallagher. And here is a ...

Faith No More: King For A Day... Fool For A Lifetime

FAITH NO MORE. as we know, have no problems with inhibitions. In fact. it's become their privilege to take risks. But how does any band ...

RAMMSTEIN ALWAYS had an unashamedly arty, even pretentious, agenda and it is easy to see this developing by watching their videos. ...

If death metal floats your boat but you're fed up with operatic vocals and politely duelling guitars, why, take a listen to Sweden's most brutal ...

System Of A Down's Shavo Odadjian: My Life Story

From Armenia to Hollywood, System of a Down's bass monster has beaten a crazy path to been a member of one of the biggest metal ...