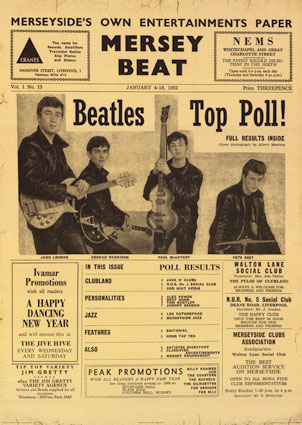 Mersey Beat was a music publication in Liverpool, England in the early 1960s. It was founded by Bill Harry, who was a classmate of John Lennon's at Liverpool Art College. The paper carried news about all the local Liverpool bands, and stars who came to town to perform. The Beatles had a close association with Mersey Beat, which carried many exclusive stories and photos of them.

IT IS A well known fact that the Dominos were the first rock group to appear on Merseyside (at least this is the view shared ...

BILLY HATTON, bass guitarist with the Four Mosts, was re-united with a friend whom he had not seen for two years. The meeting took place ...

The Beatles: At a Recording Session with the Beatles

THE SECONDS tick away, high in the control room at EMI's recording studios in St. John's Wood, London. Through the glass panel I could see ...

The Beatles: Pete Best: The Other Beatle

'Moody and Magnificent'  they said — 'He was the Great Attraction'.  Fans went wild over him. He was... The Other Beatle ...

Inez & Charlie Foxx, The Mojos, The Rolling Stones: Four Days in Liverpool For the Stones

LAST WEEK the Rolling Stones were in Liverpool for four days. With a show in Liverpool, Chester, Manchester and Wigan. They based themselves at the ...

WITH A Jackie Wilson album on her portable record player, Mary Wells was relaxing in her dressing room when we visited her. ...

BRAND NEW Searcher Frank Allen described to us some of the excitement he felt on his first worldwide trip with the group shortly before he ...