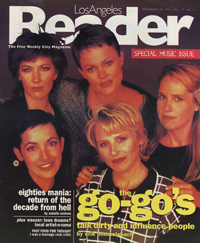 Los Angeles Reader was a weekly paper established in 1978 and distributed in Los Angeles, California. The paper was known for having lengthy, thoughtful reviews of movies, plays and concerts in the LA area. In 1996, the paper was merged with the Los Angeles View to form New Times LA.

IT SEEMS peculiarly appropriate that, on my arrival at Polydor Records' West Coast offices on Sunset Boulevard, virtually everyone is engaged in a frantic search ...

Wall of Voodoo: A Nagging Question: What’s Behind The Wall Of Voodoo?

ONE OF THE prime joys of being an ardent music fan is the sense of exhilaration that runs through you when you stumble on something ...

Kim Fowley: Tycoon of Trash: The Life And Grimes Of Kim Fowley

"Only the mice and the great ones are happy when I arrive" ...

TWO YEARS ago Eddie Vinson took part in a sax summit show at the Music Machine in West Los Angeles. In the artist's lounge before ...

THREE YEARS AGO, the extraordinary musical The Gospel at Colonus stormed Broadway.  It brilliantly reimagined the Sophocles tragedy Oedipus at Colonus by telling the story through ...

AN OFT-REPEATED myth about American popular music is that the early 1960s were a fallow period, dominated by greasy teen idols named Bobby. Supposedly, domestic ...

Hank Ballard and the Midnighters: Hank Ballard: A Talk With Mr. Twister

If you not movin' your hips, it just ain't happenin'. – Hank Ballard on dancing ...

ALTHOUGH I liked punk when I was growing up, my real adolescent obsession was with women who went pop. From Lene Lovich and Blondie to ...

THE WINDING drive up to Victoria William's house in Laurel Canyon inspires an unshakable seventies-era image – a la Joni Mitchell's ‘Ladies of the Canyon’ ...

After 40 Years, the Homeboys Are Still Cruisin' With Dick "Huggy Boy" Hugg

AT LAST SUMMER'S Los Angeles County Fair in Pomona, one of the most popular attractions wasn't a thrill ride, exhibit, installation or culinary offering. ...

The Go-Go's: The Beat And How To Get It (Again)

"YOU LOOK FAMILIAR," Kathy Valentine says as she scavenges through the remains of what were once many bags of bagels. "We didn't have our way ...

Cholly Atkins: The Man Who Taught Motown How to Dance

CHARLES "CHOLLY" ATKINS has had two careers, and he has flourished in both. In the golden age of tap, he was half of one ...

VOCALIST DARLENE Love's career is filled with ironies. She is most closely identified with Phil Spector's "Wall of Sound" recordings, made in Los Angeles in ...

Letters to Cleo: What’s To Be Bummed Out About?

LETTERS TO CLEO frontwoman Kay Hanley sits at a pay phone in a strip mall in Augusta, Georgia, near the Garden City Music Hall, where ...

Medicine: In The Proper Dosage

BRAD LANER needs to stand up. After a half hour of kneeling against his bed in a sort of praying position – simultaneously answering questions ...

THE KITCHEN door swings open, and a tiny voice wafts into the dining room, warbling with gusto "...are the luckiest people in the world." Suddenly, ...