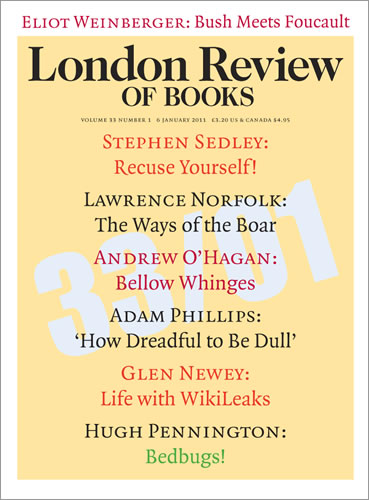 The London Review of Books (LRB) is a British journal of literary essays. It is published fortnightly.

"There was a lot of racial tension around bebop. Black men were going with fine, rich white bitches. They were all over these niggers out ...

A DREAM, just before waking. It's a day or two after Kate Bush's unexpected announcement of her return to the concert stage for a series ...

Book Review by Ian Penman, London Review of Books, 5 May 2016

THE WOMAN WHO cuts my hair – forty-something, old enough to remember punk but a neo-hippie these days – recently mentioned she'd been to see ...

IN 1975, DAVID BOWIE was in Los Angeles pretending to star in a film that wasn't being made, adapted from a memoir he would never ...