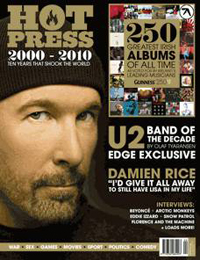 Hot Press is a fortnightly music and politics magazine based in Dublin, Ireland founded in June 1977. It is now available in an online edition.

IN THE BEGINNING was the word, and the word was Funk. Deep in the prehistoric bog, two microbes rubbed together, caused some friction, got frisky ...

Ian Brown: "I'm Ian Brown. I used to be in a band called the Stone Roses."

Characters:HUEY MORGAN: Guitarist and frontman with the Fun Lovin' Criminals. Exudes the suss and streetsmarts of Pacino in Serpico or De Niro in Mean Streets. ...

U2: Bono: The Million Dollar Man

IF IT'S PARIS it must be Spring. Bono's been out roaming the city of light with Miles' 1957 opus L'Ascenseur Pour L'Echafaudon the headphones, feeling ...

Garbage: Heart Of Garbage: Inside The Manson Family

SIXTEEN IS A state of mind that, like that summer feeling, haunts you the rest of your life. It's a quickening of stirrings into one ...

Radiohead: How Radiohead Learned To Loathe The Bomb

IN THE DAYS following the terrorist attacks on New York, the Pentagon and Pittsburgh on September 11, 2001, Radiohead were not the kind of band ...

AHEAD OF THE Red Hot Chili Peppers' forthcoming Lansdowne Road show on June 25th, Hot Press has been granted an Irish exclusive preview of the ...

WELCOME TO artimitateslife.com, a multi-streamed gush of live webcam feed where we get to see Mr Marshall Mathers as Truman trapped in some Gollywood remake ...

Shine On, The Lights Of The Bowery: The Blank Generation Revisited

ONE MORE MAN gone. A year after the passing of his brother in arms Joey, Dee Dee Ramone died from a narcotics overdose. ...

IN DAVID LYNCH’S The Straight Story, the septuagenarian Alvin Straight showed his steel when the twin freak mechanics the Olsens tried fleecing him for repairs ...

AUTUMN SPAWNED a monster. Aileen Wuornos, dubbed "America's first female serial killer" by the US media, was executed on October 9, 2002. In the aftermath, ...

HERE WE GO, once more with feeling, down the Hallowe’en Parade. In a time of interminable fluxed-upness and infinite variables, in an era of war, ...

SAIGON. Shit, I’m still only in Saigon . . . okay then, Camden. And no, we’re not throwing Martin Sheen shapes in the mirror, but ...