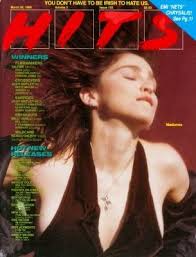 Hits was a bi-weekly trade magazine published in Los Angeles, California, aimed at entertainment lawyers, agents, managers, and radio and label execs. It now operates via a website hitsdailydouble.com

Lou Reed's Sire/WB debut, New York, marks a welcome return to the wild side for the veteran Velvet Underground founder and street bard. It is ...

NO DOUBT about it, the musical flavor of the week is Latin/Brazilian — even Paul Simon's recording an album of Brazilian music. It figures that ...

AN EXCLUSIVE HITS INTERVIEW WITH TRAVIS TRITT BY HOLLY GLEASON ...

MULE CREEK State Prison is the fourth jail rap entrepreneur Marion "Suge" Knight has been locked up in since he was given a nine-year sentence ...

Elvis Costello: Elvis Gets His Groove Back

THE ONCE-ANGRY young man of punk-rock is now practically a pop music singer-songwriting icon. It's been more than 25 years since a bespectacled nerd with ...

Phil Collins: His Turn to Testify: An Exclusive HITS dialogue with Phil Collins

JUST WHEN IT SEEMED like Phil Collins was ready to kick back and relax with his new wife Orianne and his 14-month-old son Nicholas in ...

Stan Cornyn: It's A Warner-Ful Life

FOR MORE THAN 30 years, Stan Cornyn was the "voice" of Warner Bros. and Reprise Records. The company's image-setting print advertisements – offering free Topanga ...

Holland-Dozier-Holland: They Wrote The Songs

Profile and Interview by Roy Trakin, Hits, May 2003

NIRVANA'S ALBUM NEVERMIND was out about two weeks on Oct. 9, 1991, when I conducted the following phone interview with Kurt Cobain. ...

"Come about hard and joinThe young and often spring you gaveI heard the wordWonderful thingA children's song" ('Surf’s Up') ...

Kings of Leon: Only by the Night

IT'S NO MISTAKE that two of America's most promising rock groups are from the South, steeped in the area's blend of goth, ghosts and guilt. ...

WHY DO PEOPLE CONTINUE to hate on these guys? Is it a corollary of the Sting Effect, where there's just outright jealousy over a handsome ...

MAYBE THIS IS the future of the record business. On a balmy summer evening in L.A., we're gathered in a suburban backyard, twinkling lights strung ...

I'VE HAD MY eye on the artist formerly known as Stefani Joanne Germanotta since May 2008, when I wrote about a local Hollywood showcase. ...

IT'S BEEN A LONG TIME since I've seen the legendary founder of the Modern Lovers, the man-child my fellow companion at a show once showered ...

"CAUSE I KNOW my weakness, know my voice," sings Marcus Mumford on the title track of Babel, the spectacularly successful U.K. folk-rockers' second album. "And ...

Neil Young: After The Gold Rush: The Legacy of Elliot Roberts

THE DICTIONARY definition of the word manager should have Elliot Roberts' picture alongside it. Roberts, who died on Friday, June 21, at the age of ...