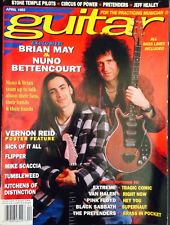 Guitar (or more fully, Guitar for the Practicing Musician) was a guitar magazine published in the United States from 1983 to 1999. It was then absorbed into Guitar One magazine.

"WE CALL IT BILLY Bolts or Billy Bolt Upright. I just sort of sit up and become this person Billy Bolt. You lust get into ...

LIKE A POLITICIAN ON THE PODIUM, whistle-stopping across the boondocks on a flatbed, Keith Richards has his share of timeless bromides, comfortable answers his tongue ...

IN A ROCK 'N' ROLL world seemingly littered with spandex sheep, Bob Mould is a definite character, from his solid, Midwestern farmboy semi-crew and lumpen ...

Interview by Bruce Pollock, Guitar, May 1988

TURNING POINTS in the history of rock 'n' roll are moments frozen into the souls of those who witness them. Up in the Northeast Tundra ...

TRYING TO COME up with enticing copy about Leo Kottke, is a little like writing an ad for Kellogg's Corn Flakes. There's something about ...

IT'S A VOICE you remember, possessing in its cavernous reaches the smoky essence of an age. ...

"Oh I look just like a sad old hooker!" wails Kristin Hersh as a false eyelash falls from her heavily made-up face and just misses ...

JUST WHO do Gene think they are? Appearing out of nowhere last spring, the London-based quartet produced three highly contagious singles, had journalists fawning all ...

After a whole year of well-publicised feuds with Axl Rose, Guns N' Roses' Slash has now cut loose to record his own album with a ...

"I DO INTERVIEWS every once in a while," sighs J.J. Cale, with a resigned expression. "In fact, with this new album I think I've done ...

HELMET'S PAGE HAMILTON has impeccable credentials. He holds a master's degree in jazz performance from Manhattan School of Music, and he has been part of ...

Report and Interview by Mike Mettler, Guitar, May 1997

SEEING ZZ TOP'S Billy Gibbons without his trademark shades on is like viewing the emperor with no clothes: it's a startling vision. Yet here's the ...