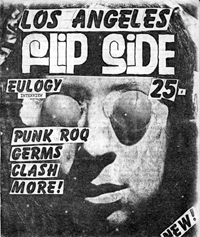 Flipside was a punk rock fanzine published in Los Angeles, California from 1977 to 2000.

MIDDLE CLASS were interviewed at Argos Coffee Place in Hollywood. Bassist Mike Patton, singer Jeff and drummer Mat were present – and me, Shredder... ...

THE GUN CLUB don’t give a shit. Born and bred under the scorching suns of Dallas, El Paso and (yuk yuk) Los Angeles, rifle in ...

PENELOPE SPHEERIS is the director of the now quite old L.A. punk film The Decline Of Western Civilization, and she turns out to be a ...

YOU'RE PROBABLY thinking "Why the Blasters' guitarist Dave Alvin and bassist John Bazz in Flipside?" I, Shredder, am thinking "Why not?". They're just an aspiring ...

IT'S A TOUGH JOB, but someone's gotta do it. Declan Patrick 'Aloysius' McManus, aka Napoleon Dynamite, aka The Imposter, aka Tiny Hands Of Concrete; a ...

From the mean streets of New York to the palm trees of Hawaii, Flipside talks herbs, pasta, cocktails, garlic and garbage with Fun Lovin' Criminal ...

The girl who was discovered singing on a tube station at the age of 15, picked up 2 MOBOs and 1 Brit award, and scored ...

Jay Z: The Life And Times Of Jay-Z: An Interview