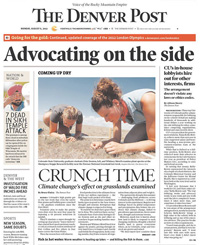 The Denver Post is a daily newspaper that has been published in Denver, Colorado, since 1892.

ANYONE CAN HAVE a paralyzing, life-diminishing accident at anytime - bad things happen to good people just as often as good things. You just accept ...

IF THE RACIAL history of the American South was a book, it would be a tragedy - but not without inspirational chapters about black and ...

THERE IS SUCH a thing in rock music as "the chill factor.'' Itrefers to songs that, because of some unusual element - a cryingguitar, perhaps, ...

COUNTRY-AND-WESTERN music and European art songs aren't as strange a combination as you might think. ...

"YOU THINK THERE'LL be enough interest in this that I'll be able to make a fortune giving theremin lessons?" ...

THIS YEAR is Clarence 'Gatemouth'' Brown's 50th as a recording artist, and virtually everyone is preparing to honor the blues musician. ...

ALL ACROSS AMERICA last week, there was one big question after the Academy Award nominations were announced: "Billy Bob who?''  ...

LIFE IS SHORT with few guarantees. But here's one – Kate and Anna McGarrigle will always make wonderful folk music. If only they weren't so ...

IT'S 1966 ALL over again in the world of pop music – and the Denver International Film Festival, which just concluded, was in  the centre ...

Gene Pitney Gets His Limelight

THE BIG NEWS at this year's Rock and Roll Hall of Fame induction ceremonies was that Gene Pitney finally got in. ...

Bill Haley: Jim Dawson: Rock Around the Clock - The Record that Started the Rock Revolution

DID HOLLYWOOD create rock 'n' roll? That sounds like a strange, ridiculous and even offensive question to anyone who likes rock and all its musical ...

JONATHAN DEMME orders orange juice for himself, Neil Young and a reporter at downtown's Zoom Restaurant in Park City, Utah - a refreshing way to ...

IF LEONARD COHEN, now 74, intends to retire from performing after his current tour, he couldn't have picked a better venue for his final North ...