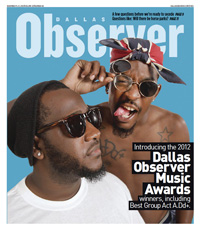 The Dallas Observer, founded in 1980, is a free alternative weekly newspaper distributed in Dallas, Texas

X: Billy Zoom’s Out, But X Goes On

"YOU KNOW HOW overrated this club business is, psychologically," Dewey Groom is saying, shaking his head. "People think it's a good-time job. They think it's ...

The Strange Odyssey Of Acid House

LONDON – On February 9, 1989, the mutant musical movement known as Acid House made it into The Dallas Morning News for the second time ...

Whiskeytown: Out of Town

THE GREAT major-label mergings and purgings of the last several years have lost hundreds of people their jobs – but another tragic result is that ...

WHEN IT DEBUTED with 1996's Fuzzy Logic, Super Furry Animals never even came close to figuring into the whole "Oasis vs. Blur vs. everyone else" ...

FREE ALL ANGELS finally hits the United States a full year after its release in the U.K., where it's been a huge hit. And fortunately, ...

PRECISELY WHY Guns N' Roses' North American tour came to an abrupt end last week, days before it was scheduled to hit the American Airlines ...