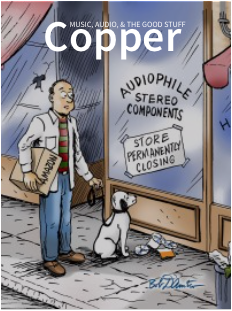 Copper is a magazine about music: the sound of it, the feel of it, the emotion of it and the people who create it.

Copper has pieces by musicians, engineers, philosophers, audio designers, historians, and people who love music, both live and recorded.

Published by PS Audio, Copper: The Journal of Music and Audio is a free online magazine delivered every other week.

Dave Alvin: From An Old Guitar – Rare and Unreleased Recordings

YOU'RE DRIVING through the New Mexico desert in the dark. Your teeth are grinding, though the buzz of the blue meth or whatever you were ...

Bob Dylan: Dylan Dials Up JFK, the Wolfman, and Whitman

'MURDER MOST Foul', Bob Dylan's newly released song, is long. It is 17 minutes and change, about as long as 'Desolation Row' and 'Like a ...

IT MIGHT BE hard to imagine, but there was a time when there was not a Japanese restaurant in every city neighborhood and suburban strip ...

BANANAGUN HAD ME won over with their name, a readymade punch line for a mild risqué joke often attributed to the actress Mae West. "Is ...

THERE IS A Saturday Night Live sketch from 1996 in which then Prime Minister John Major (Mike Myers) partakes in the traditional 15 minutes of ...

THE FIRST ALBUM I ever bought with my own money was Presenting Dion and the Belmonts (Laurie LLP 1002). In faded red ink from a ...