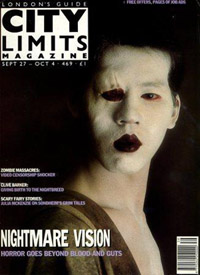 City Limits magazine was founded in 1981 in London by former staff members of the weekly London listings magazine Time Out, after its owner Tony Elliott abandoned running Time Out on co-operative principles. It closed in 1993.

Invasion Of The Walkmen People

It was was back in 1964 when Andy Warhol married his cassette machine. "The acquisition of my tape recorder" he revealed eleven years later, "really ...

With his 1976 debut album, Tom Petty became a rock star. It seemed he was cast in the classic mould – a hip young American ...

This week sees the opening of Smithereens, a low-budget feature film by Manhattan film school grad Susan Seidelman. Initially an experiment shot in 1980, it ...

IN THE DAYS of Beau Brummell or even Baudelaire, to be a dandy was to be a true social outlaw – one whose fixed individuality ...

"They put the numb into number — the cut into cutie — the slum into slumber — the boot into beauty." ...

Can a group that conjure up ugly buildings and vegetables conquer the world? Do they want to? MARK COOPER meets the makers of Steve McQueen. ...

TRACY CHAPMAN is fresh, focused – and making her points with hard – hitting folk. Lucy O’Brien talked to a new kind of star. ...

THEIR FIRST champions over here told Galaxie 500 that the fabulous clammy whine of their music (electric, but only just) was the sound of the ...

Ronnie Spector: Be My Baby

Be My Baby: Ronnie Spector with Vince Waldron ...