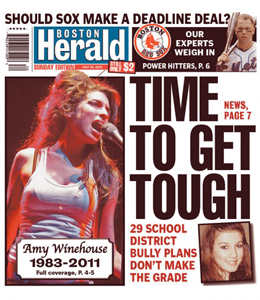 Established in 1846, the Boston Herald is one of America's longest-running daily newspapers.

The Pogues: House of Blues, Boston

THE POGUES PLAYED a packed House of Blues on Friday night, offering up a rowdy mix of songs both angry and wrenching, vicious and sentimental, ...

ONE DECADE AGO, on Halloween, the three guys in Guster donned tuxedos and played a packed Orpheum, riding high on their breakthrough CD, Lost and ...

IAN MCCULLOCH likes to ruminate. Spend an hour with the lead singer-songwriter of Echo & the Bunnymen and he'll swerve through a plethora of topics. ...

WHETHER YOU WERE a rock fan in 1975 — or whether you weren't even conceived — you're going to want to take in The Runaways, ...

Buzzcocks: For Buzzcocks, age of 'Nostalgia' is now

Report and Interview by Jim Sullivan, Boston Herald, 16 May 2010

THIRTY-TWO YEARS ago, a young British punk-pop band, Buzzcocks, recorded a song called 'Nostalgia'. It included these words from singer/guitarist Pete Shelley: "My future and ...

"ONE OF THE greatest country cities in the world, Boston, Massachusetts," Brad Paisley gushed last night to a Gillette Stadium crowd of 51,000. And as ...

MORE THAN A half-century back, young girls screamed for Elvis. Three decades ago, they screamed for Michael Jackson. Tuesday at a packed Paradise, they were ...

FEW THINGS ARE certain in life, but this is: At some point Wednesday during the Flaming Lips concert at Bank of America Pavilion, singer Wayne ...

YES, OH LAND is her real name – sort of. "My friends and family call me Nanna and I would like it to stay that ...

Lambchop stands out from the herd