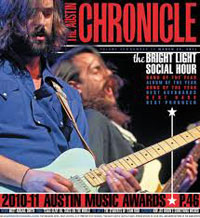 The Austin Chronicle is an alternative weekly, tabloid-style newspaper published every Thursday in Austin, Texas. It was launched in 1981.

IN TEXAS, it's damn near impossible to start a band so unscrewed that even hardcore fans shake their heads in wonder at the absurdity of ...

GARAGE ROCK is a hard elephant to describe, in the light or in the dark. In some ways, almost everything qualifies. In others, nothing quite ...

Retrospective and Interview by Bill Bentley, Austin Chronicle, 23 May 2003

DESIGNATED DRUMMER. IF YOU'RE GOING to hang a tag on the able shoulders of Ernesto "Ernie" Durawa, that would be the one. For almost 50 ...

THE FIRST TIME I met Clifford Antone, he sold me a sandwich. He had opened a shop on Guadalupe, right around the corner from the ...

THE BAND'S been playing at least an hour, but it feels like five minutes. Besides 'You Really Got Me', 'Roll Over Beethoven' and Bob Dylan's ...