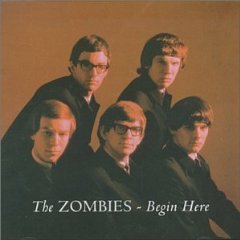 THANKS TO THE SUCCESS of Argent, Colin Blunstone, and the 'Monster Mash', the long-neglected Zombies are again coming to light. London's fluke smash with the ...

Colin Blunstone looks back at the Zombies, from their formation in leafy St. Albans, via their first hit 'She's Not There', on to package tours of the US and finally to the crumbling of the band and its aftermath

The Zombies: The group with the brainpower

ALREADY IN the charts with their first sensational release 'She's Not There', the Zombies must be one of the most different groups on the scene. ...

The Zombies: The Next 'In' Group

Zombies Debut Here but With Some Changes ...

I PERSONALLY used to spend a lot of time in school carving "What's become of the Zombies" on desks. Which is to say that I ...

Plague of the Zombies

Were the Zombies one of the great neglected bands of the '60s? They had their hits, broke up and then created the sort of interest ...

The Zombies: Everything you wanted to know!

HALF A YEAR AGO I would have started this piece by saying that the Zombies, like so many other defunct mid-Sixties groups, have suffered dreadfully ...

AS ONE of Britain's most undervalued and undeservedly unsuccessful groups, the Zombies have a lot of historical recompense coming. Furthermore, with two offshoots (Argent and ...

Whatever Happened To The Zombies?

REMEMBER THOSE wispy vocals that adorned those Zombies’ classics like 'She’s Not There', 'Tell Her No', and 'Time Of the Season'? The voice drifted from ...

Colin Blunstone: Back From The Dead

THE YEAR IS 1969, and somewhere in the heart of America the Archies and Zombies — two groups known to everyone — are triumphantly touring ...

Time Of The Zombies

The Zombies: The Class Act

EVEN THE MOST MICROSCOPIC EXAMINATION of early publicity shots of bookish, bespectacled quintet The Zombies yields no clue that these middle class English boys in ...

Zombie Heaven claims to include 99.5 per cent of everything you ever recorded. There must be a few unheard demos that slipped through the net. ...

MOJO MAGAZINE recently anointed the Zombies the fourth unluckiest band in pop history, largely because it scored its biggest hit, ‘Time of the Season’, more ...

Album of the Living Dead: How the Zombies made Odessey & Oracle

Retrospective and Interview by Dorian Lynskey, The Guardian, 22 February 2008

The Zombies recorded their last album in 1967, released it with a spelling mistake on the cover, then split up. But Odessey & Oracle has ...

Van Morrison's revival of Astral Weeks is the latest example of yesterday's cult LPs being turned into today's sell-out concerts. ...

Why Your Favourite Band Should Split Up

From the Pixies to the Zombies, Jude Rogers talks to the bands who chose to burn out, not fade away ...

IN TODAY'S pop culture, zombies are hot. Their lumbering, slack-jawed forms are moving (albeit slowly) on TV and in movies, video games, and off the ...

MUCH OF THE Zombies' music, even early on, was original material mostly written by Rod Argent and Chris White. It's something that Colin Blunstone still ...

The Zombies: An Interview with Rod Argent

SAY THIS about the Zombies: They were ahead of the curve. We live in a world where you can't turn on the TV or go ...