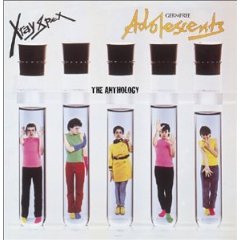 A SMALLISH basement room, low-ceilinged, with a bar along one wall, and quite plush – tonite healthily full with about 100 people, A stopgap scene ...

BACK IN nineteen-sixty-something, when an earlier new wave was proudly unfurling, several Live at the Star Club LPs appeared, scooping up some of the bands ...

X-Ray Spex: Oh Bondage! Up Yours!

"IF SOMEBODY said I was a sex symbol, I'd shave me'ead tomorrer," cackled Poly Styrene. "'Oh Bondage Up Yours' ain't about sex particularly. In fact ...

IT WAS just another press conference. Poly Styrene looked surprisingly radiant, showing no signs of the traumas she had suffered over recent months. ...

AS HE STOOD at the top of Whitehall at 10.35 last Sunday morning gazing impassively towards Nelson's Column, the optimism of Commander Walker of Scotland ...

SUNDAY NIGHT in Croydon, and Poly Styrene's voice is shot. Flu goes for the throat like a cornered rat: when the victim's a singer, the ...

X-Ray Spex, Adam & The Ants, The Automatics: The Roundhouse, London

AS MS. POLY'S strychnine air-raid voice shreds the encore and all present, the audience front-line snaps. ...

PUBLIC IMAGE: 'Public Image' (Virgin) 'ELLO, A LOW-key re-emergence which grows on ya. I know everybody was expecting another anthem but here ya go, this ...

SOUNDS FOR sophisticated head-bangers, noises for Nembuthal nights. X-Ray Spex carry the standard of 1977 (which reads fun) on the flagpole of 1979 (constructed from ...

"I WANNA BE A FROZEN PEA!" Does Poly Styrene finally make it? Will she really dehydrate? Does she turn into a Teasmade? Will she... ...

SMASH THE barriers and the truth shall make you free (as long as stocks last, anyway): barriers between humans and objects, between the natural (sic) ...

Rock Against Racism: Tom Robinson thinks of it as "the punk Woodstock" and it was the moment that punk went overground and people's band the ...

Profile and Interview by Nick Hasted, The Independent, 21 November 2008

Thirty years after singing of bondage and toothpaste, via a stay at a psychiatric hospital and motherhood, Poly Styrene is back on stage, without X-Ray ...

Poly Styrene: A Life In Day-Glo

Lasses of the Mohicans