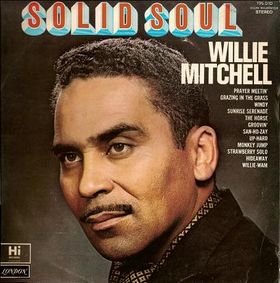 The legendary Memphis producer talks about the rise of Southern Soul and the Memphis Sound, meeting and producing Al Green and making all those fabulous hits for Hi Records

THE SUCCESS story of the day in our music must lie in Memphis with that patient and ever consistent genius, Willie Mitchell. Since he became ...

WILLIE MITCHELL. His name is synonymous with the rich brass sound that has become known worldwide as the Memphis Sound. For years, Willie as been ...

Willie Mitchell's distinctive Memphis sound has been the driving force behind many golden hits over the years. Now he feels it's time for a change. ...

Willie Mitchell has virtually forsaken his own career in favour of running Hi Records and putting the label back up there... ...

From Hi to Waylo: the Spirit of Memphis Soul

LOVERS OF authentic southern American soul are in for a major treat this weekend when a "Memphis Soul Revue" holds court at London's Town & ...

Long in the shadow of Sun and Stax, Memphis based Hi Records finally hit the big time with Al Green and set the '70s soul ...

Willie Mitchell, maestro of the Memphis soul sound that gave the world Al Green, has his life’s work celebrated by the box set Hi Times: ...

In the late '70s, Al Green was a troubled superstar who abandoned the stage in favour of the pulpit. Then last winter, after 25 years, ...

Hi Rhythm, Memphis' other soul house band, made music into a family affair ...

IT'S BEEN OVER a half a century since Al Greene & the Soulmates [sic], then based in Grand Rapids, Michigan, released their first album Back ...