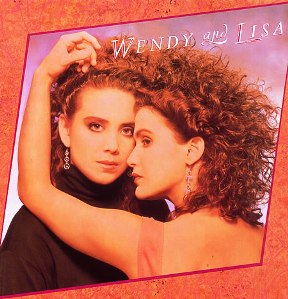 The Girl Bros. talk about their time as part of Prince's Revolution, and their then-new career as recording artists in their own right.

WENDY Melvoin and Lisa Coleman go back a long way. Years before they were members of Prince's group, The Revolution, they were growing up as ...

WENDY & LISA USED TO BE PART OF PRINCE'S REVOLUTION. NOW THEY'RE STORMING THE BARRICADES WITH A SOLO CAREER. PURPLE RAIN OR JUST A DAMP ...

TIME WAS when any R&B act of consequence bore the imprimatur of Prince or one of his aliases. These days, the big buzz is from ...

WOMEN IN unison. A glaring gaggle. A terrifying prospect. Wasn't it in fact Dorothy Parker, theoretically one of their own, who wrote, "I hate women. ...

ON THEIR 1987 debut album, Wendy Melvoin and Lisa Coleman seemed to be bending over backward not to sound like Prince, whose band they had ...

AFTER THEIR JUICY FRUIT AT THE BOTTOM LP GOT THE ECSTATIC REVIEWS IT SO RICHLY DESERVED, IT WAS ONLY A MATTER OF TIME BEFORE WENDY AND LISA ...

Outside the studio he was reticent. Inside he became the most ambitious, audacious auteur of the '80s. Marc Weingarten talks to his key collaborators to ...

TWO US TELEVISION shows with little in common beyond the fact that they have made their mark on the viewing public and garnered critical warmth, ...

PRINCE HAS long been considered a gold standard as a singer, guitarist, stage performer, and producer. He's such a singular force, though, that he hasn't ...