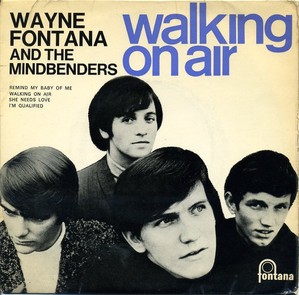 "WHAT'S YOUR idea of a 'switched on' girl?" was the question I had come to ask Wayne Fontana and The Mindbenders. To hear their answers, ...

Report and Interview by Peter Jones, Record Mirror, 1 May 1965

Manchester's musical conquest of the States, by Peter Jones ...

A Touch of Magic

WARMTH, TINGLE, love. Eyes that penetrate to the farthest seats in the theatre. Magnetism by a fragile body. A person, just like any other, only ...

If The Singers Left... (what would happen to the groups?)

THERE ARE ALWAYS A LOT OF RUMOURS BUZZING ROUND THE POP SCENE THAT CERTAIN MEMBERS OF A GROUP ARE THINKING ABOUT LEAVING. THIS STORY DOESN'T ...

IT'S RIOTS, riots all the way for Herman's Hermits and Wayne Fontana and the Mindbenders on their tour of the States. American fans are teeming ...

When Your Favourites Go On Holiday, They Usually Have To Work!

WHEREVER YOU are on holiday this year... the chances are you may bump into your favourite pop star! Some of the biggest names in the ...

THE MINDBENDERS have come a long way since the days when they were backing group to Wayne Fontana — and Wayne, believe it or not, ...

ANY CONNOISSEUR of bad pop package shows would have been delighted by Radio England's "Swinging '66" opening at Lewisham Odeon on Friday, starring the Small ...