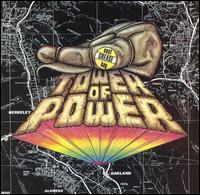 I CAN JUST see the perverse gleam in the editor's eye as he sent me this album to review. He sure knows how to bug ...

THE POOR Whisky stage has never been made to bear so much weight to so little avail as it must this week. Tower of Power ...

It's More Starvation Than Success for Rock Musicians

THOUGH THERE is plenty of big money floating around the recording industry, few rock bands ever see any. ...

THE FUNK burner bubbles constantly in the background, but it doesn't compensate for the lack of good material. Even the token ballad, 'Time Will Tell,' ...

"YEAH, IT was that same old gospel thing. Fact is I sang in the same church as Sly Stone and Edwin Hawkins. I was really ...

BY FAR THE biggest ensemble to be visiting Europe on the Warners tour is Tower of Power, the Oakland based blues and soul outfit whose ...

Tower of Power: Confessions of an East Bay greaser

Tower of Power vocalist spills the beans on those big bad boys from Oakland. ...

THIS IS essentially transitional meat from Oakland, Soul City's finest. ...

EVEN THOUGH some people feel that their artist roster may just be too large to enable any act to 'happen' in a big way, CBS ...

These liner notes were originally written for the now out-of-print 1995 Ichiban Soul Classics CD Lenny Williams: 'Cause I Love You: The Best of Lenny ...

The Tower Of Power horn section is one of the best in the business. The group not only performs as a solo act, but is ...