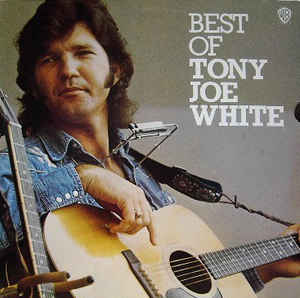 TONY JOE WHITE just loves to play the ingenu. The sleeve of Homemade Ice Cream has photographs of him "up at Turkey Creek" and titles ...

The Louisiana Swamp God on having his best stuff rejected by Warner Bros.; selling songs to others, and his pleasure at some of their versions; Elvis doing 'Polk Salad Annie'; on songwriting; on being compared to Barry White; on going fishing with his mom, and eating catfish; his new album, Eyes, and looking back at how he got started.

THE ONLY OTHER record I possess on English Monument, is Ray Steven's single, 'Mr Businessman', which is beautiful and so is this album by Mr ...

TONY JOE WHITE may well be the most sympathetic man making music today. His records show a man who cares about people, a Southerner with ...

TONY JOE WHITE was one of the first of the new school of Southern singer/songwriters – along with Jerry Reed, Joe South, Leon Russell, Dough ...

LISTENING TO Tony Joe White speak is like taking an excursion deep into the man's boots via the steamy swamps of his native Louisiana, where ...

Tony Joe White: This Here, Y'all, Is Tony Joe

PEOPLE OFTEN ask what it's like to interview pop stars. Well like most things in life, there are the good times, and the bad times, ...

DOWNHOME MUSIC is where it's at. Clarence Carter. J.J. Cale. Tom T. Hall. Candi Staton. They all sound laid back to me and they are ...

I'VE HAD a healthy respect for the work of Tony Joe White for quite some time now, and it is because of the excellence of ...

SO YOU thought Tony Joe White was a downhome country guy with his feet firmly in the mud of the Mississippi swamps? ...

IT'S MIDNIGHT, and I'm still dazed from a bolt out of the blue which hit me some time around 1.15 this afternoon. Completely unexpectedly, Tony ...

Still Going Strong - Polk Salad Annie: It (and She)

THERE'S AN intangible something about Tony Joe White that puts me in mind of Elvis; but whoever he looks like, he is disgustingly handsome. ...

Report and Interview by Chris Bourke, Rip It Up, November 1993

AS YOU DRIVE south out of Memphis down Highway 61, the trees and houses stop at the edge of the city limits. On either side ...

THERE WAS SOMETHING funky happening in the American South in the late ‘60s and you didn’t know what it was, did you, Mr Jones? ...

Tony Joe White: Audience With The Other Elvis

Tony Joe White, writer of 'Polk Salad Annie' and 'Rainy Night in Georgia', talks to Chris Campion about his mythic songs and his Louisiana childhood ...

LOUISIANA-BORN Tony Joe White scored his biggest hit, the stomping 'Polk Salad Annie', in 1969, and has been making great swamp rock ever since. ...