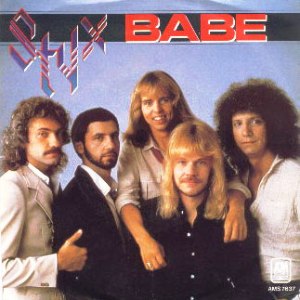 NO QUESTION about it. Styx were stuck. Their second album had lain on the record warehouse shelves for two years doing nothing but gather dust. ...

THIS ONE I rather like. Not so much for its musical qualities but for the strange sense of homour through which these five debonair Chicagoans ...

NOPE, I WON'T deny it, I've liked Styx since I first heard their 'Lady' single. The ferocious chords of that tune crashed out with a ...

LIKE A FOREST fire, the flames of the new wave roared across the British rock scene, leaving behind a charred and blackened landscape. A few ...

STYX, AS you'll doubtless be aware if you're familiar with the curious musical predilections of our American cousins, are a disgustingly successful five-piece band of ...

BY DAY, DENNIS DE YOUNG WAS A REGULAR GUY WITH A PONCEY NAME, LACQUERED HAIR, AND A PENCHANT FOR GAUDY FAKE ANTIQUE FURNITURE... BUT BY ...

Styx: A Bang and a Wimp-er

Can Styx Save America?

MEET THE Premise. Rock 'n' roll has been banned from this good green Earth by your usual bunch of hypocrites. Woe is everyone. Along comes ...

For Dennis DeYoung, It's Still the Best of Times

TO MANY classic-rock fans, it would seem a bit of unnecessary clarification to bill a Dennis DeYoung show as "Dennis DeYoung: The Music of Styx". ...