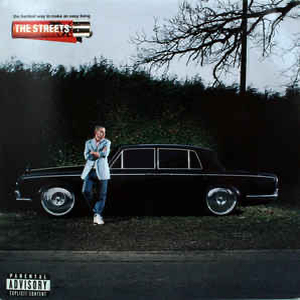 Mike Skinner talks about finding his voice, making Original Pirate Material, writing, politics, getting high and about life itself.

Out of the garage and onto The Streets. Watch out, this boy makes bangers… ...

GEEZERS NEED EXCITEMENT. WHICH IS WHERE THE STREETS, AKA MIKE SKINNER, COMES IN. THE PEOPLE'S POET IN TWO-STEP'S GARMS, HE IS THE WIMP MADE GOOD, ...

UK Rap: The word on The Streets

WHEN MIKE SKINNER, aka The Streets, the 22-year-old lyrical king of British rap, discovers I live within the sound of Bow Bells, he's immediately curious. ...

The Streets: The British Can't Rap, Haven't You Heard?

THE BRITISH have always had a flair for taking black American music, giving it a twist and then exporting it back, stylishly repackaged. Blues, R&B, ...

Live Review by Will Hermes, The Village Voice, 29 October 2002

TALK ABOUT BRINGING coal to Newcastle. Sunday's New York debut of U.K. MC The Streets (a/k/a Mike "A Day in the Life of a Geezer" Skinner) drew ...

Letter from London: The Streets and Ms Dynamite

WHEN THE BEATLES flew over from England in the '60s, it seemed the whole of young America gathered at the airport to scream a welcome. ...

'I LOVE THE NAME "The Streets",' muses 24 year-old Mike Skinner - at once the mercurial creative-director, canny CEO and flaky spokesmodel of that thriving ...

THE DEBUT ALBUM by Mike Skinner, a.k.a. The Streets, (Original Pirate Material) was a touching, thoughtful ode to all the aspects of modern Britain its ...

LISTENING TO The Streets, one gets a clear indication that Mike Skinner is a punk. He's the kind of guy who'd borrow your car and ...

The Streets: The Hardest Way to Make an Easy Living

DOES IT SIGNAL the beginning of the end when an artist casts around for inspiration and can think of nothing to write about other than ...

MIKE SKINNER'S EXISTENCE has been transformed by success and fortune. It's a fortune accrued by observing, in startlingly prosaic detail, a life of Wetherspoons and ...

FAME, ACCLAIM and sudden wealth can be terrible burdens for a young pop star. Such is the overriding theme of The Hardest Way to Make ...

The Streets: Everything Is Borrowed

MIKE SKINNER'S artistic forte has always been his quicksilver, meticulous eye for detail. He has chronicled his life like a roguish, Ecstasy-generation Pepys. ...

The Streets: Everything Is Borrowed **

The last one honked. This is possibly even worse. ...

Professor Green and Example are Streets ahead as rap stars

Profile and Interview by Pete Paphides, The Times, 13 July 2010

With the two young London rappers enjoying mainstream success, they explain how they outgrew their mentor, Mike Skinner. ...

The Streets: Computers and Blues

YOU'LL HAVE TO meet us halfway on this, but Mike Skinner's swansong plays like a cracking old wake – Skinner's of course. ...

The flinching star Mike Skinner still has something to say after lockdown ...