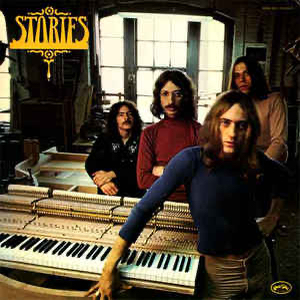 ONCE MICHAEL BROWN led a group called the Left Banke, who produced two of the most memorable singles of the mid-sixties, 'Walk Away Renee' and ...

STORIES IS a New York-based quartet which plays music with a strong kinship to British rock, yet lacks the ‘rank imitator’ brand of many a ...

STORIES HAVE GOTTEN into the habit of changing drastically right after they put out an album, which would be disastrous if their mutations weren't always ...

The Left Banke and Stories : The Michael Brown Story

THE ALBUM DEBUT of Stories was one of the most exciting musical events of 1972. A number of excellent LP's in a new American lightweight ...

Stories: A Stories With A Happy Ending

FROM THE beginning, Stories were a rather unique band unlike any other. The 'known' member of the group, Michael Brown, had been a leading exponent ...

"THIS IS NOT what I wanted," Enrol Brown mused over a boiled egg breakfast in his London penthouse. "Tony Wilson and I will still get ...

STORIES MADE their first New Orleans concert appearance recently in the incongruous company of yet another Southern Allmanesque boogie band, the Marshall Tucker aggregation, and ...

STORIES COPED with the loss of founder Michael Brown (a fine keyboard player and songwriter who also led the Left Banke) by recording 'Brother Louie', ...