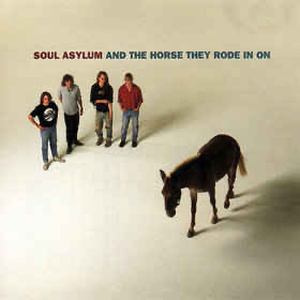 SOUL ASYLUM are lean, scrappy, hungry. they play with a determination to make their mark quickly. They play to win. ...

Soul Asylum: Plaider Than You’ll Ever Be

Profile and Interview by Ira Robbins, Creem, May 1988

It might be said that Soul Asylum is just a wonderful rock 'n' roll band from Minneapolis, a rough and ready quartet embodying explosive energy, ...

2005 note: I don’t think I ever played one of their records ONCE in all the years since I interviewed them (haha a "sensible Clash" ...

Soul Asylum: Soul Asylum and the Horse They Rode In On (Twin-Tone/A&M) ***

THE FOUR MEMBERS of the Minneapolis band Soul Asylum honed their chops in the imposing shadow of the almighty Hüsker Dü. When the Hüskers split ...

"WE'RE THE opening band," mumbled Dave Pirner, as Soul Asylum burst into 'Veil of Tears', kicking off the final set of what was a pretty ...

A MERE six years ago, rock records accounted for half the world's popular music sales. Today the white, Anglo-American alliance has seen its market share ...

The Minneapolis Scene: Left Of The Dial

In the early Eighties, Hüsker Dü, The Replacements and a handful of other scruffy Minneapolis bands forged what is now known as indie rock. This ...

Soul Asylum: The Man Who Souled The World

Soul Asylum singer Dave Pirner has made a packet out of one big hit. And if he ever gets short, he can borrow a few ...