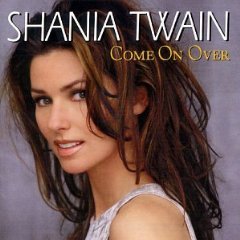 IT IS THE AUGUST holiday weekend, but there is no rest for Shania Twain. New country music's hottest new sensation is busy paying her dues ...

Shania Twain: Come On Over ***

THE FIRST thing you notice about Shania Twain's Come On Over, once you get past her pretty pictures on the cover, is how the titles ...

Why settle for the pleasantly inoffensive tunes of Shania Twain when Missy Elliott and her posse are busy rewriting the hip-hop rulebook. ...

Up! Is A Direction: Shania Twain’s New CD(s)

She was singing in bars at age eight. She lived for Supertramp. And she married the world's most successful hair-metal producer. So how on Earth ...

Shania Twain's empowering Friday night anthems have accrued a certain gravitas in the age of #MeToo, as her surprisingly meaty tour proves. ...