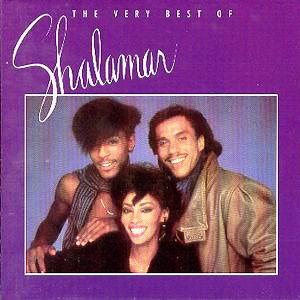 THE NAME of Simon Soussan is synonymous with the authentic British Northern disco scene/sound. Before joining the "brain drain" and defecting to America (Los Angeles, ...

JEFFREY DANIEL, Jody Watley and Howard Hewett have quite a few good reasons to feel good right now. As the members of hit group Shalamar, ...

Sex and the Solar People

TIM LOTT goes to LA to watch the glitter and tinsel of the biggest thing happening in black music at the moment ...

THE CONCERT is billed as the Solar Galaxy of Stars, and it's no idle boast. ...

IT WASN'T that Shalamar don't have their own distinctive sound. It wasn't that they didn't make their presence felt on their first ever British live ...

AN ALBUM to establish Shalamar as LP artists and not just the final part of another disco assembly line churning out three-minute pounding product, not ...

SURPRISING AS it may seem, the hottest ticket in town at present is not for ABC, Yazoo or any other of the leading lights of ...

From just another American disco outfit to an extremely hip modern dance band in only a matter of months. Is it all down to Jeffrey's ...

Shalamar: The Second Time Around

LATE LAST March, under the advice of a close friend, Jeffrey Daniels, one third of a group called Shalamar, took a walk down the Kings ...

Jeffrey Daniels: Popping Off The Rails

Is Jeffrey Daniels on the right track? Gavin Martin has his doubts when he finds out that the king of the body poppers has been ...

Watley's Looking For A New Career