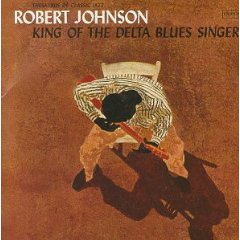 The ZZ Topper talks about his enduring love for bluesman Robert Johnson: on first hearing Columbia's 1961 release King of the Delta Blues Singers; the dark impact of his music; the aspects of mystery surrounding Johnson; his favourite songs; Johnson's superb technique and delivery; the "pact with the Devil" myth, and being given dirt from that crossroads; the newly discovered photograph of Johnson, and his hands; his impact on ZZ Top, and the blues psychogeography of the Mississippi Delta.

THE LEGENDARY Robert Johnson showed up at the ARC Field Studios five times between November 1936 and June 1937, cutting a mere 29 sides in ...

Unravelling the Legend of Robert Johnson

Robert Johnson: Demons on the Delta

Standing at the crossroadsI tried to flag a rideNobody seemed to know meEverybody passed me by.– 'Crossroads Blues' by Robert Johnson ...

THE POWERFUL FASCINATION which the legend of Robert Johnson still exerts over virtually all blues fans is derived, in almost equal proportion, from his genius ...

And the days keeps on worryin' me There's a hellhound on my trail ...

The Devil's Work: The plundering of Robert Johnson

THE SUN did not shine but it was hot as hell the day a memorial stone was unveiled for bluesman Robert Johnson near a country ...

Demythologizing Robert Johnson: Chipping Away at the Myths That Encrust a Blues Legend

THE LEGEND OF Robert Johnson was a long time in the building, and it was forged by the fusion of his brilliance and his obscurity. ...

Elijah Wald: Escaping the Delta - Robert Johnson and the Invention of the Blues

THE IMAGE OF the bluesman Robert Johnson standing at a crossroads in the Mississippi Delta, selling his soul to play guitar as though he had ...

Travelling Riverside Blues is a chapter in Graham Reid's Postcards From Elsewhere collection of travel stories (Random House) and is available through his website: www.elsewhere.co.nz ...

The Death of Robert Johnson

The Very Last Fair Deal Gone Down? A preview of the "ultimate" Robert Johnson reissue package

Robert Johnson used a variety of tricks to hide his remarkable technique from copyists, even dancing while he played. ...

As Richard Russell's collaborative album, Everything Is Recorded, is released, RC's Jamie Atkins meets him to talk about the recording and the music that led ...

THOUGH HE only made 40 recordings, US blues artist Robert Johnson's legacy has endured for over eight decades and his songs are now part of ...