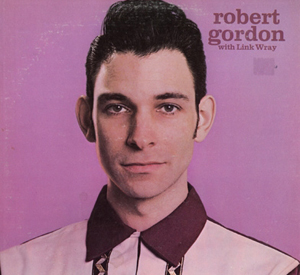 THERE'S MORE similarity between these two albums than the fact that they've both got 'Red Hot' on 'em. They're the opposite ends of the rockabilly ...

ROBERT GORDON with Link Wray recaptures the one elusive quality so often missing from music of the '70s: feeling. This is trickier than it seems ...

FOR SOME odd reason Private Stock don't want you to know that Robert Gordon used to be with those CBGB specials Tuff Darts. Richard Robinson ...

Robert Gordon with Link Wray: A Modern Elvis And The Missing Link

LINK WRAY finishes off his instrumental street opera, 'Rumble', with an amphetamine-psychosis, note-tumbling-after-note run worthy of any guitar army hero, clambers up from his bent-knee, ...

Have Guitar, Will Travel: Chris Spedding

CHRIS SPEDDING — the name that launched a thousand session credits. He's played guitar for everyone from John Cale to the Wombles, including Bryan Ferry, ...

Down And Out In Paris The Robert Gordon Way

ABUSIVE IS THE only word to describe the audience the last time Robert Gordon was in Detroit as part of a some-thought-smart/some-thought-not-so-smart double bill with ...

IN 1977 a skinny young man with a gravity defying pompadour and a room-filling, Elvis-worthy voice kicked off his solo career with the old Billy ...