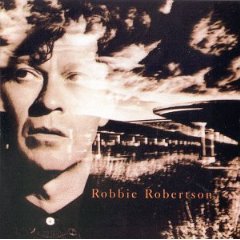 The ex-Band man on Martin Scorsese and movie soundtracks, his Contact from the Underworld of Redboy album, Native-American politics and music, and looks back at Bo Diddley, the Dylan '74 tour and the great bluesmen.

The erstwhile Band songwriter talks about his Contact from the Underworld of Redboy album; working with Howie B; the involvement of jailed Native American activist Leonard Peltier; the Peyote religion; writing for the different voices in the Band, and writing film music for Martin Scorsese.

QUALITY IS something that Robbie Robertson definitely understands. ...

Daniel Lanois: The Producer as Conscience

"THERE'S A lot of pollution out there," says Daniel Lanois, drinking tea in the gazebo of his Santa Monica hotel one September morning, before continuing ...

Robbie Robertson: Off the Band Stand

After turning off the road to rock and ruin, Robbie Robertson is back — on his own terms. Mark Cooper reports ...

Robbie Robertson: "Fireworks were going off in the '60s. Music was happening quicker than people could deal with."

TWENTY YEARS ago, you and the Band seemed to set yourselves apart from the whole psychedelic scene that was so popular at the time. ...

STEPPING OFF a Greyhound bus from Toronto in 1961, a 17-year-old boy found himself in West Helena, Ark., by the banks of the Mississippi River, ...

It's New Orleans, high summer, and everybody's wilting with the heat. Everybody, that is, except Robbie Robertson – the legendary Band guitarist who's just made ...

Robbing America for a storyline thread

ROBBIE ROBERTSON should be used to jetlag. He spent 16 years on the road as a member of The Band and knows only too well ...

Robbie Robertson: The Underworld of Redboy

RBP: A Musical History seems like a formidable undertaking. ...

Robbie Robertson: The Man Who Knew Too Much

SILLY ME. I assumed that I would be interviewing Robbie Robertson in the quaint Kensington mews flat that I had been sent to. But instead ...

ROBBIE ROBERTSON isn't exactly known for being prolific. In the almost 37 years since The Last Waltz marked his final show with The Band, he ...

THE BAND'S STORY continues to beguile: how did a group so rich in talent and promise implode so hopelessly, only to pull the rabbit out ...

ONE OF THE delightful aspects of The Last Waltz, Martin Scorsese's doc of The Band's goodbye hootenanny, are the scene-setting vignettes from the group that ...