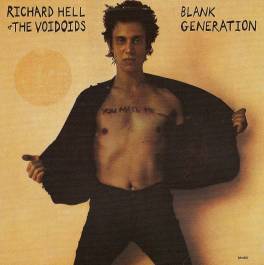 Richard Hell: The Return Of The Bug-Eyed Monster

The former Voidoid talks at length about his latest novel, Godlike: the provocative nature of the material; the politics of identity and political correctness, poetry. He also reflects on his '70s self; why he left music, and how his new compilation CD, Spurts: the Richard Hell Story, draws a line under his life as a musician.

New York: Plug in to the Nerve-ends of the Naked City

Victor Bockris goes to the Airport with Robert Mapplethorpe

SATURDAY OCTOBER 16th 2P.M. Robert Mapplethorpe is going to California on a T.W.A. flight. I am arriving at his fifth floor Bond Street studio loft ...

Richard Hell: The Jaws of Hell

"RICHARD HELL is always a little bit WORSE than everybody else." ...

2:39 Richard Hell and the Voidoids glide into take one of 'The Plan', a quirky composition, supported by subtle mood changes. At 2:43 it's finished. ...

IT'S THE voice you hear first and foremost here.   ...

LAST MONTH the more alert London habituee got the chance to compare England's new wave inner-workings with those of its fore-runner over in New York ...

To Hell and Back: Richard Hell

"I'M GLAD my name's Hell, because at least those people at the radio stations are gonna have some idea what to expect. I intend to ...

RICHARD HELL HAS been touted as an underground genius for nearly three years, and this debut album boldly tries to document him as such. The ...

THERE IS something about the Music Machine in Camden Town that severely dulls one's capacity for enjoyment of an evening of live rock. ...

To Hell and Back: Richard Hell

RICHARD HELL had just got up, and one of the first things he focused on was John Tobler, looming over him with a tape recorder. ...

Richard Hell: Who Says It's Good To Be Alive?

To Hell and back (it's located on a houseboat near Cheyne Walk)... in which the head Voidoid expounds on life in manner both humorous and ...

An exercise in calculation ...

Richard Hell: To Hell With Destiny

A TRIP down destiny street can take place any time. ...

SAY YOU AND these other guys used to hang out in this neighborhood, and you all had pretty much the same goals, the same diversions, ...

This week sees the opening of Smithereens, a low-budget feature film by Manhattan film school grad Susan Seidelman. Initially an experiment shot in 1980, it ...

"YOU'VE GOT to hear this," insists Robert Quine, as he finds what he's looking for on a wall full of shelves sprouting thousands of records. ...

RICHARD HELL had an idea earlier this year. ...

WHO IS ROBERT Quine? According to him, he 'remains one of the most compelling, appalling and universally hated figures in music history.' ...

RICHARD MEYERS, AKA Richard Hell, has more than made his mark on many areas of the media. Musically, he formed Television with Tom Verlaine, the ...

What Fresh Hell Is This?

RICHARD HELL was the primal Punk, the ur-Punk: the spiky-haired one. The torn t-shirts, the safety pins, the era-defining ‘Blank Generation’–much of the ...

Richard Hell: Hell Is Other People

IN HOT And Cold, Richard Hell's new collection of three decades of writing, there's a photo of a young obscure poet called Theresa Stern. She ...

The original Bowery ripped-shirt nihilist – born plain Richard Meyers in Kentucky – is back with two collections of odds'n'ends: the two-CD Time (Matador) and ...

RICHARD HELL can walk down the street in New York City's East Village without being recognized. ...

Profile and Interview by Nick Hasted, The Independent, 19 August 2005

RICHARD HELL was punk's John the Baptist. In one year, 1974, he found the movement its home (CBGB's), created its style (ripped and spiked), indicated ...

CBGB: The Venue from Hell

It seems like every other prepubescent has a CBGB T-shirt these days, but over in New York, the old guard are fighting a losing battle ...