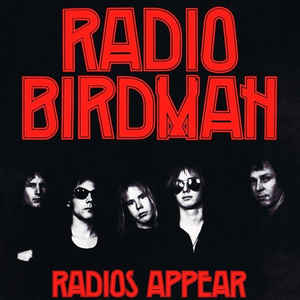 RON KEELEY, Radio Birdman's drummer, is sitting on a steel framed chair listening to a just competent group pound out hard rock as best it ...

THE SAINTS' recent emigration to England reopens the question: is there punk after Perth? In Sydney, which some describe as Canoga Park on the far ...

The rock group Radio Birdman, whose followers almost became a secret society, is soon to rise again as the New Race, a controversial name with ...

Come on baby it's time to moveYou been saying there's nothing to doDon't be afraid of bustin' out of your cageGonna cruise around gonna burn ...

Radio Birdman: Birds of a Feather Rock Together

THERE ARE two general categories of musicians in Halls of Fame – the supremely successful sellers of concerts and records, and those who pave the ...

Retrospective and Interview by Keith Cameron, The Guardian, 20 July 2007

You thought punks in the UK had things to be angry about? Over in Australia, bands had a real fight on their hands, says Keith ...

The '70s band battled poverty, depression and infighting. Descent into the Maelstrom shows how they also changed the face of Australian music. ...