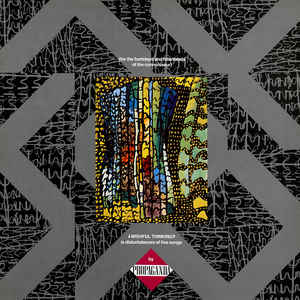 Remember those glorious early days of Stiff, 2-Tone, Postcard, and the like? — heady times when copping the latest labels' latest carried more clout than ...

ZTT: The Morley & Horn Show present How To Make A Spectacle of Yourself

The first year of ZTT has been a spectacular success, with Frankie Goes To Hollywood singles 'Relax' and 'Two Tribes' becoming respectively the fourth and ...

Propaganda: A Song From Europe

The German pop group Propaganda released their last single, 'Dr Mabuse', over a year ago. Then they had to wait while their record company devoted time to Frankie Goes To Hollywood. And ...

Propaganda: There Is No Information, Only Disinformation And Propaganda

Chris Roberts goes in search of the truth ...

Propaganda: Doctrine In The House

MICK SINCLAIR MEETS THE QUIET TYPES WITH THE ABILITY TO EXPLODE ...

Propaganda: The Pop Machinery Cranks On

In the frozen musical wastes of '86, Claudia Brucken-Morley thinks of PROPAGANDA as "being a life long thing". CHRIS ROBERTS is thinking more along the ...

Frankie Goes To Hollywood, Art Of Noise et al: A Force From Above

Your Wish Is My Command: Propaganda's A Secret Wish

Celebrating 25 years since its release, Propaganda's A Secret Wish has just been reissued with a bonus disc of rarities. Wyndham Wallace confronts their Sturm ...

Fizzing with conflicting creative energies, Propaganda could have been a disaster. Instead they constructed a masterpiece. ...