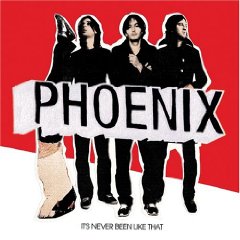 AIR'S ADORABLE Moon Safari proved if nothing else that the pop universe had become a less xenophobic place. Now comes the first album by Phoenix, ...

Phoenix are French and funky and like some very uncool records indeed, says Lisa Verrico ...

THEY'RE FRENCH, they're pals with Air – and they sound like Steely Dan. ...

WOULD LONDON BE rocking tonight to Phoenix if they weren’t French? I ask only as a fellow countryman of this very fine group. If Thomas ...

WHEN FRENCH POP did the unthinkable and became cool, Phoenix found themselves on the ones to watch list. Disappointingly they never got off it. The ...

The hot-air balloon, the electric iron and the current trend for shiny '70s and '80s-inspired synthpop: the French tend to get there first. ...

By the Time They Get to… Phoenix

GROWING UP IN Versailles, an affluent suburb of Paris, the four boys who would eventually form Phoenix bonded over their love of American pop culture. ...

ALLY PALLY IS a ruthless venue that chews up and spits out all but the best of live bands. To succeed in this cavernous space, ...