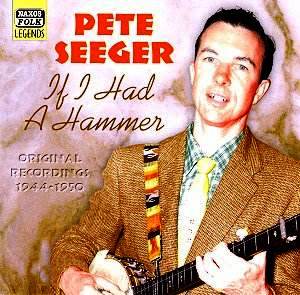 Live Review by Robert Shelton, The New York Times, 3 May 1963

PETE SEEGER is a man who could sing practically anywhere and give a good account of him self. On Folk Music Live At The Village ...

HE DID it again! Every time Pete Seeger puts on a solo concert in Britain I wonder if he can pull it off, the unique ...

Pete Seeger: Together In Concert

PETE SEEGER HAS just about every credential it's possible for a folk singer to have without actually being dead. ...

Retrospective by Dave Laing, The History of Rock, 1982

Seeger and Guthrie: A Tradition Continues

WHEN ARLO Guthrie and Pete Seeger performed together at Wolf Trap three summers ago, they managed to convince the sell-out crowd that they weren't really ...

Irwin Silber of Sing Out!

IN THE mid-1960's Irwin Silber was editor of Sing Out! magazine, the leading folk periodical in the United States. Here he talks about his personal ...

Bruce Springsteen: We Shall Overcome – The Seeger Sessions

Report and Interview by Edward Helmore, The Guardian, 1 February 2007

ON THE FIRST Friday of the month, in fine weather and sometimes foul, you will find Pete Seeger, the folk-singing legend and pioneering environmentalist, in ...

Pete Seeger: The Voice Of America

WHEN PETE SEEGER, the man Bruce Springsteen calls "the father of American folk music", walks on stage at Madison Square Garden on May 3 for ...

IN THE NEW biography The Protest Singer, folk music paragon Pete Seeger tells writer Alec Wilkinson that the single word he believes in above all ...

Pete Seeger: The road goes on for ever

The folk singer believed in handing on the traditions he had done so much to save, so that others could carry them forward. It was ...

THIS YEAR IS the 50th Anniversary of Bob Dylan armed with an electric guitar, taking the stage at the Newport Folk Festival, backed by a ...