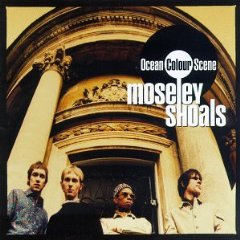 AT TIMES tonight, Ocean Colour Scene really do make sense. When Stephen Craddock's guitar bursts into 'Yesterday Today' and singer Simon matches it with a ...

If 1989 was the year Manchester proclaimed itself pop capital of Britain, 1990 was when reality caught up with the rhetoric. ...

THE SAGA SO FAR: Manchester is out, Liverpool is in (again), Bristolians are as sore as ever and good London bands don't exist. Where this ...

OCEAN COLOUR SCENE have got booking the supports sussed. Liverpudlian veterans The Real People turn in a tuneful set. Good call. The DJ gets the ...

OCEAN COLOUR SCENE stir mighty passions in the breasts of some — Paul Weller and Noel Gallagher being the conspicuous celeb celebrants — and leave ...

WHERE WERE we again? Oh yeah: we were discussing what country and western music from a modern English rock band would sound like. ...