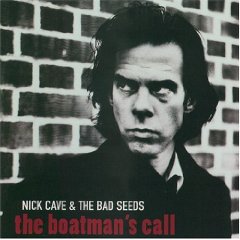 Rage Has Not Withered Him

Nick Cave never thought he'd get past 40, but heroin and self-hate are behind him now. Married and "reborn", he writes nine to five in ...

The interview was meant to be about The Bad Seeds' Kicking Against The Pricks, but swiftly degenerates into an attack on music journalism in general, and interviewer Mat Snow in particular

The Head Seed talks about his writing (the collection King Ink and new novel And The Ass Saw The Angel); his work on the movie Ghosts… of the Civil Dead and his latest album Tender Prey.

The Bad Seeds frontman talks in depth about, among many things, his art; the departure of Blixa Bargeld; his relationship with Mick Harvey; the degree of biography in his songs; heroin and God, and the Australian-ness of himself and his work.

IT'S A CHILL, exposed night in New York City. The East Coast has only just recovered from a week of torrential rains, and winds sweeping ...

Primal Pain at the Psychos' Party: The Birthday Party at the Venue, London

WHEN The Birthday Party last desecrated this tabernacle of modern nightlife, a generally sloppy show produced the intemperate engorgement of Drunk On The Pope's Blood, ...

THE BIRTHDAY PARTY are probably the most important rock band Australia has ever produced. They made music that was blatantly rock at a time when ...

Nick Cave: If This Is Heaven I'm Bailing Out

THE ENIGMA of The Birthday Party, like that of Kaspar Hauser, begins with grunts in the darkness and ends in murder. ...

Nick Cave: From Her To Eternity (Mute)

NICK CAVE'S From Her To Eternity is one of the greatest rock albums ever made. Now read on... ...

The bats screech, and inside a rockin' coffin, something stirs...up fly the nails and out pops SCREAMIN' JAY HAWKINS, longtime voodoo swamp beast back to ...

Nick Cave: Prick Me Do I Not Bleed?

AMONG NICK Cave's most prized possessions is a hardcover green book stuffed with press cuttings and private observations written in his painstakingly spidery hand. ...

TALKING TO NICK CAVE is a bit of a trial. He’s not really a proper person. Like many artists, what makes him a genius also ...

AFTER A YEAR AWAY, NICK CAVE RETURNS FROM THE WILDERNESS WITH ANOTHER LADELFUL OF PEARLS AND PESSIMISM. CHRIS ROBERTS MEETS THE MAN WHO SEES EVERYTHING ...

Nick Cave: The Needle And The Damage Done

Nick Cave: The Return of the Prodigal Son

Throughout the turmoil of the ‘80s, Nick Cave was on some sort of slow development course. From the pithy pop blunders of Boys Next Door ...

For the second of our special Fan Files, we look at Nick Cave, the singer who's so damn slinky and shaggable that even women want ...

A Lighter Shade of Cave

JON SAVAGE MEETS THE SINGER KNOWN AS THE PUNK MESSIAH ...

Nick Cave and Kylie Minogue: The Devil and Miss Bones

Together at last — two great antipodean, pop phenomena who have, in their individual ways, made a unique contribution to the business called show. NICK ...

HAL WILLNER has been described as an "auteur" producer, but he doesn't have a trademark sound, like Trevor Horn or Quincy Jones, and he's not ...

Co-Dependent: A Potted History of Drugs and Australian Music

A Boy Next Door

He gets up at five a.m. and works. He leads an ordered domestic life. Bob Dylan likes him. He is clean and sober. ...

AT EXACTLY twenty seven minutes past eight, the polite but firm announcement is made. "Nick Cave will take the stage in three minutes." ...

Nick Cave: Out of the Shadows

After years on the dark side of the street, Nick Cave lightens up. ...

FOR A HIGH-MINDED musical elder statesman like Nick Cave, cultural credibility comes in many forms. The 47-year-old Australian export has hosted London's Meltdown festival, been ...

The Lyre of Cave: An Interview

RBP: Could you have imagined, all those years ago, that you’d have this amazingly even and consistent career? ...

ON ABATTOIR BLUES, the cheerily-titled first half of the new double album by Nick Cave and the Bad Seeds, there is a song called ‘There ...

It's been a 25-year trip from hard drugs and punch-ups in the Birthday Party to life as a 9-to-5 songwriter/genius. So, in a world of ...

Writer Debbie Kruger spoke to the biggest names in Australian music for her new book Songwriters Speak. In this exclusive extract, Nick Cave explains why ...

Report and Interview by Jason Cohen, Rolling Stone, 8 May 2006

THE PROPOSITION, director John Hillcoat's solemn and violently unsentimental Australian western, has its fair share of stars in the cast. ...

THE NEW NAME – the alter ego, the Bad Seeds doppelganger – sounds like some hideous Saw-style horror flick: Nick Cave recasts The Hitcher in ...

Nick Cave: Back to the Ballroom

"TEA? PIECE OF CAKE?" says Nick Cave civilly. After an earlier on-tour interview at the Malmaison Hotel, Manchester, he's invited MOJO to his office, a ...

IS BUNNY MUNRO Nick Cave's version of Willy Loman with a hard on? In The Death of Bunny Munro the Australian rock 'n' roll singer ...

NICK CAVE was never going to settle for "just" being a rock star. Right back from when I was first aware of him, in the ...

Nick Cave's new fiction hero is a monstrous expression of the male psyche grotesquely obsessed with sex, he tells James Medd. Did he evolve from ...

Marianne Faithfull: Give My Love To London

Recuperating from serious injury, the veteran chanteuse puts her back into one of her most personal records... ...

WHEN YOU'VE personally witnessed Nick Cave nodding out on heroin and slowly lowering his head into a candle flame – his mass of dyed black ...

Nick Cave: One More Time With Feeling, Skeleton Tree and the power and language of grief

The subject matter is heavy – the death of a child – but the results are divine in an album that emerges from struggle to ...

One More Time with Nick Cave

The Love and Terror of Nick Cave

For four decades, Nick Cave has been at the edge of music, putting his spin on everything from punk rock to lovesick ballads – much ...

Ratso Has A Record (and a duet with Nick Cave)

WHAT MOST PEOPLE dream about, Larry "Ratso" Sloman makes happen. Anyone who's read Ratso's first book, 1978's On The Road With Bob Dylan, has witnessed ...

Nick Cave: The Journalist and the Singer

THE FIRST TIME I ever spoke to Nick Cave was in a phone interview to promote his second solo album, The Firstborn Is Dead (1985), ...