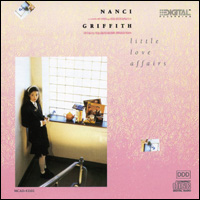 Report and Interview by Adam Sweeting, The Guardian, 27 March 1987

It may have had a hard time persuading people to take it seriously but, as Adam Sweeting reports, country music is winning ...

Simon Witter travelled to Nashville to find out if there's any substance to the media'slatest rediscovery. ...

SHE'S THE very picture of vulnerability. The little girl stands – bobby sox, blazer, hair-band, sprig of blue bonnets in hand – by the window, ...

THE WORD 'CHANTEUSE' seems to be undergoing one of its periodic journalistic revivals. It's a slightly unusual word, it's French and it was always far ...

Nanci Griffith's music may live happily in bedsit or honky-tonk but she tells anecdotes onstage to stop her audience fist-fighting, reports Adam Sweeting ...

INFAMOUS for posing for pictures with books by her favourite Southern authors — Larry McMurtry (Deep South epics) and Carson McCullers (Ballad Of The Sad ...

THOSE WHO found Nanci Griffith's last two efforts for MCA to be awash in pop-lite production and overblown instrumentation should take Other Voices, Other Rooms ...

About to make a welcome return to our concert halls and with a new album imminent, Nanci Griffith is in conversation with R2's David Burke. ...