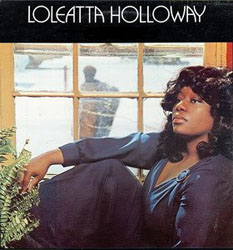 The disco diva on her forthcoming Queen of the Night album; on singing ballads and dance tracks; on how she works a crowd; on her gospel background and playing clubs with the Mighty Clouds of Joy... and how difficult she found the transition from gospel to secular music.

IT WOULDN'T take a genius to notice that Loleatta Holloway's delectable US hit, 'Cry To Me', is simply one of my favourite sounds of all ...

WITH ALL the current trends taking everyone from Melba Moore to Eddie Kendricks and Thelma Houston into the 'disco' arena, it should come as no ...

Loleatta Holloway: Queen Of The Night

Loleatta Holloway: It's My Record (And I'll Cry If I Want To)

You might not know the name, but you'll have heard the voice of LOLEATTA HOLLOWAY. It was her earth-shaking vocal on Dan Hartman's 'Love Sensation' ...

There's insurrection in the ranks. Stock Aitken & Waterman's supremacy has been overthrown by a troupe of battle-scarred no-holds-barred dance producers from Bologna. Phil Sutcliffe ...

Did that girl in BLACK BOX used to be a bloke?

No! She's always been a lassie. But she did used to be a rugby player. Tom Doyle pokes his nose into the peculiar world of ...

Having been sampled to distraction by all and sundry and having suffered her fair share of rip offs, Loleatta Holloway is back with a new ...