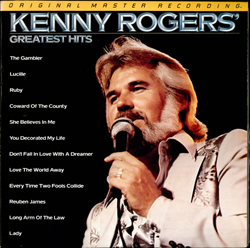 Mr. Rogers talks about re-recording his old hits; his uneasy relationship with the Country Music industry; changing labels; his time with the New Christy Minstrels; growing up listening to doowop and R&B his huge back catalogue... and not writing (many) songs anymore.

‘THEY'RE a bunch of real nice guys,’ said the publicity man, talking about Kenny Rogers and the First Edition. Which is a very standard line ...

USA For Africa: We Are The World (Columbia)