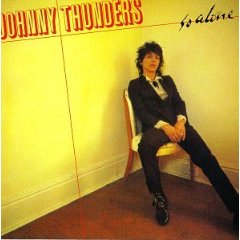 Johnny Thunders: Nothing Is Forever

Maybe you sneered at the New York Dolls; so maybe you missed a Distant Early Warning of the new wave. Johnny Thunders is back in ...

WHEN JOHNNY came swaggering home last month (well, second home), you could safely bet there was no other place I'd be that night than right ...

"SHUT UP!" Johnny Thunders yells, greeting the crowd at Jonathan Swift's about an hour after his set is scheduled to start. "You guys ready for ...

Beyond The Valley Of The New York Dolls

THE FIRST TIME I ever laid eyes on the New York Dolls was New Year's Eve, 1972, at the old Mercer Arts Center, and, quite ...

Two of the original New York Dolls are in London. BARNEY HOSKYNS charts their destinies. ...

THE LATEST trio of ROIR cassettes expands the label's category of historical documentation – a division which offers some excuse for the fact that Reachout ...

JOHNNY THUNDERS' drug habit has been his brazen insignia since his days with the New York Dolls. In fact, he once led the notorious Junkies ...

WHEN JOHNNY came marching back to London this time around, he took us all by surprise. ...

Johnny Thunders: An American In Sweden

SO, WHY did I wait around half a day for a three-minute interview with Johnny Thunders? ...

JOHNNY THUNDERS had long been a by-word for self-destruction through drugs and hard living. In 1981, Trouser Press magazine cynically declared Thunders "legally dead" alongside a cartoon ...

AMONG THE LIFETIME residents of abyssville are those rock'n'rollers whose faith in the liberating rebellion of mangy guitar music gets crossed up into a personal ...

JOHNNY THUNDERS'S principal solo claim to fame, So Alone consists of Dollsy covers (the Shangri-Las' ‘Give Him a Great Big Kiss,’ the Chantays' surf chestnut ...

Born To Lose: A Film About Johnny Thunders

NINETEEN YEARS in gestation, Born To Lose – which matches the addled life and times of its subject Johnny Thunders by being simultaneously intriguing and ...

JOHNNY THUNDERS didn’t just flirt with death, he courted it. Even so, his eventual demise in New Orleans on 23rd April 1991 still came as ...

FOR THE GENERATION of kids who became punks, the New York Dolls' appearance on The Old Grey Whistle Test in November 1973 was an epiphany. ...

In Cold Blood: The Death of Johnny Thunders

How much do we know about the death of Johnny Thunders? That it was murder, says Kris Needs. ...

Johnny was a great songwriter… here's the proof. ...

Retrospective by Graeme Thomson, Uncut, May 2011

"Everything JOHNNY THUNDERS touched broke," says one of his old bandmates. On the 20th anniversary of Thunders' death, Uncut pieces together the story of a ...