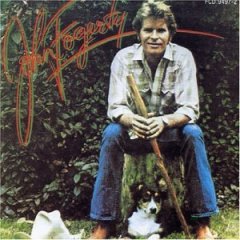 I have a better title, except Malamud already claimed it: The Natural. John Fogerty's sound could never be pinned down to time or ...

The former Creedence frontman looks back on the end of Creedence and his relations with the band; on Fantasy Records boss Saul Zaentz and being sued for "self-plagiarism"; on his tricky relationship with brother Tom; on not being psychedelic in San Francisco during the Summer of Love; on hearing the blues, Elvis and Bay Area R&B radio... and on life after Creedence and how much happier he is now.

JOHN FOGERTY is many things, none of them ordinary. Besides his obvious musical ability, he is unique even among musicians. A loner, self-reliant and firmly ...

JOHN FOGERTY singlehandedly prepares records that are virtually perfect in execution as well as conception: brilliantly concise self-expression, captivating and broad-based radio music. Though he ...

IT'S BEEN TEN or twelve years since the East Bay Golliwogs traipsed onto some crepe-strewn highschool gym floor and set up, almost a decade since ...

John Fogerty Looks At Rock In ‘76

''Let's face it," John Fogerty was saying, "could I wear eye shadow and get away with it?" He was speaking of the sense of alienation ...

Where Has John Fogerty Gone?

As apocalyptic anxiety at nameless dread descend on the body politic, how relevant the work of Creedence Clearwater now seems. ...

Will Creedence Clearwater ever be revived?

JOHN FOGERTY, once the driving force behind Creedence Clearwater Revival, is a strange one, and his older brother, former Creedence rhythm guitarist Tom Fogerty, is ...

TIME STANDS still in Fogertyville. It’s ten years since the old Creedence leader made a record and nothing much has changed. There’s a few syndrums ...

IN TERMS of influence, rather than current hitmaking potential, John Fogerty can't be overestimated. Forget that Bonnie Tyler did 'Have You Ever Seen The Rain', ...

The Natural Is Back

WHAT BECOMES a legend most? You won't find John Fogerty in mink. He favors checked flannel shirts, suspenders, jeans and work boots, would rather go ...

John Fogerty: On The Road Again

John Fogerty returns to the stage after a fourteen-year layoff ...

Case is latest round in long fight with Fantasy Records ...

ON SUNDAY, November 3rd, more than 300,000 people showed up at the Polo Field in Golden Gate Park for the biggest rock concert ever held ...

Lenny Waronker: All In The Family

AFTER 10 LONG YEARS, John Fogerty is back with Blue Moon Swamp, his first album since 1986's Eye of the Zombie, and it is a far better, breezier affair. ...

Life's a bitch when you lose a few million in a big banking scam, get sued for plagiarising yourself and haven't released a record in ...

THE HISTORY of rock'n'roll bears witness to the power of the unmistakably individual voice bubbling up from subterranean reservoirs of the blues, gospel, and country ...

Just before he embarked on last summer's Blue Moon Swamp tour, John Fogerty told Goldmine that "the new John and the old John are the ...

IT'S NOT HARD TO UNDERSTAND how a popular artist might tire of singing the words to his biggest hits after decades of doing so. Year ...

ON REVIVAL (Fantasy Records), John Fogerty comes to terms with and maybe even makes peace with his past. In doing so he's created one of ...

The Guitars of John Fogerty: How Creedence pioneer learned to love the Les Paul

I'M NOT SURE what John Fogerty went through internally after (and even during) the fall of CCR. I have my educated guesses, but they're just ...

LONG-OVERDUE review of one of the best shows I've seen all year, by the American singer/songwriter I'd consider second only to Springsteen. (There – that ...

The prime mover behind Creedence Clearwater Revival, he crafted blazing pop songs of soul and protest until band strife and label hell undid him. But ...